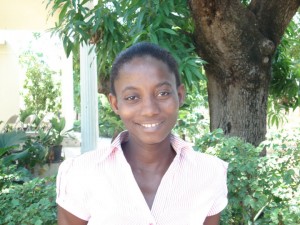 One of Rudie Linneka Jean’s favorite pastimes as a child was “playing church” at her family’s home outside the city of Jacmel.  But it was the health professionals in her family who had the biggest impact on her decision to go into nursing.  Her grandfather was an herbalist, and she remembers how he treated people in his home where she and her parents also lived until they moved into the city.  Her father was a public health officer and hoped his daughter would become a doctor.  While Rudie knew at a young age that she was interested in health, her interest in nursing was further inspired by Miami Vice.  She first dreamed of being a detective and then realized that nurses were needed at crime scenes and in investigations.  Her dream is to study nursing and criminology.  After the earthquake, she will be living in a house supported by Sionfonds.