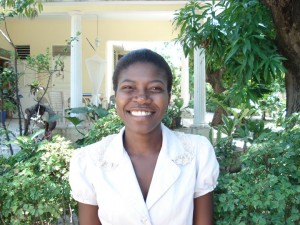 Mirta Bazile comes from an area on the outskirts of jacmel where she lived with her mother, two sisters and three brothers.  As a girl, she loved school and church.  After church she would come home and teach the younger kids the songs they had sung.  In school Mirta liked biology, chemistry and philosophy.  After high school she came to Port-au-Prince for nursing school.  The house she was living in with her sister was destroyed in the earthquake, and she will be living in a house rented by Sionfonds so that she can continue school.  Mirta’s choice to study nursing was an easy one that she made at age 13.  She remembers visiting people in the hospital and when confronted with the massive suffering all around her, having the sense that she had to do something to help.  Her dream is to work with the people in greatest need.  While she believes in prevention, the work that speaks to her heart is giving people who are critically ill that last chance at survival.