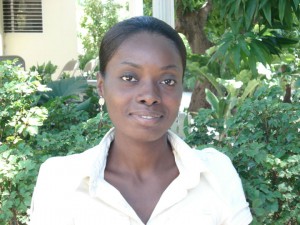 Delva Fabiola was in her first year of nursing school when the earthquake destroyed her parents’ house, where she was living, as well as their belongs and livelihood. As a child, Delva went to public school where her favorite subjects were Math and French. She didn’t speak much in class and admits that she is still shy from time to time. After high school she started training in information technology because she thought it would be a practical skill, but one year into her program, she realized she didn’t have a passion for it. She was always sensitive to people who were suffering and realized that nursing would be the best career for her. Through Sionfonds’ support, she began her first year of nursing school. As a result of the earthquake, Delva and her family are all living on the street, and her parents are no longer able to assist with her living and transportation expenses. Her dream is to finish nursing school and get a degree in social work so that she can combine the two professions, working in the community with a focus on health.